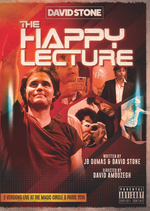 (If you get Happy Lecture in a "package", you will receive a personal code to watch the lecture online)

Enjoy David Stone’s new crazy lecture from the front row !  Filmed in Paris and at the famous Magic Circle in London where David received in both places a standing ovation. Watch, learn and have fun !

French version is subtitled. English version filmed in London at the Magic Circle.